Unnamed wife
Admiral Grimmitz is a character from DuckTales. He is the Navy commander on the aircraft carrier that Donald Duck is an enlisted sailor on. He always gets annoyed at Donald's accident-prone stunts, and likes to play with military equipment that makes things "go ka-blooey."

He was voiced by Peter Cullen, and the voice was based on that of John Wayne (much like how he did so with Optimus Prime). His name is based on United States Navy Admiral Chester Nimitz, who commanded American naval forces in the Pacific during World War II. 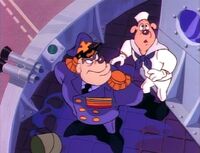 Retrieved from "https://the-disney-afternoon.fandom.com/wiki/Admiral_Grimmitz?oldid=26288"
Community content is available under CC-BY-SA unless otherwise noted.