"Ah, phooey!"
Donald Fauntleroy Duck is a supporting character on DuckTales and one of the main characters on Quack Pack. He is a white anthropomorphic duck whose most famous personality trait is his easily provoked and explosive temper. He has starred in many cartoons and comics produced by The Walt Disney Company, having originated as a supporting character in the 1934 Silly Symphony The Wise Little Hen. He soon rose to become the studio's major star, eclipsing Mickey Mouse in popularity and starring in more than 100 theatrical cartoons through 1961. He was also a major star in comics (gathering an equally popular array of co-stars such as his nephews Huey, Dewey and Louie and uncle Scrooge McDuck), and remains an active figure in Disney television shows, comic books, and countless shows and parades at the Disney theme parks. 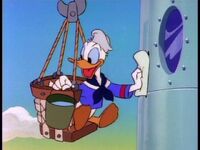 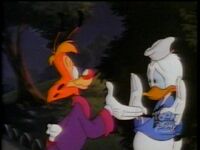 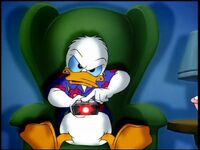 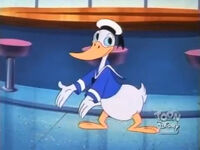 Donald's original 1934 design, as seen in "Can't Take a Yolk".
Add a photo to this gallery

Retrieved from "https://the-disney-afternoon.fandom.com/wiki/Donald_Duck?oldid=34962"
Community content is available under CC-BY-SA unless otherwise noted.