DuckTales Issue #3 was the third issue of the third DuckTales comic series, and the third part of the "Rightful Owners" arc.

This issue's story was reprinted in the following publications:

This issue received heavy criticism for its poor pacing and sloppy artwork. Particular negativity was given to page 19, in which the hypnotized Gladstone offers to join Scrooge on his expedition while Rockerduck commends Billups and Cinnamon on their work. In the issue itself, the page has a rather sketchy, unfinished look, and the lower panels with Rockerduck do not actually show the characters he is addressing, instead using the same drawing of him and Jeeves twice.[1][2] Also, on page 4, the characters are all only colored one specific color each, rather than being fully colored. When the story arc was reprinted in the DuckTales: Rightful Owners trade paperback, a more complete-looking, redrawn version of page 19 was used, and the characters were correctly colored on page 4. Unfortunately, for some reason, the story's reprint in IDW Publishing's Disney Afternoon Giant #3 used the original, unfinished-looking versions of these pages. 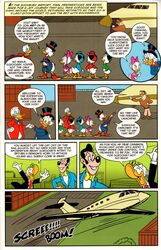 Page 19 as it appeared in this issue and Disney Afternoon Giant #3. 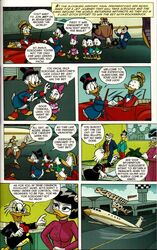 The redrawn Page 19 as it appeared in the trade paperback.

Retrieved from "https://the-disney-afternoon.fandom.com/wiki/DuckTales_(Boom!_Studios)_Issue_3?oldid=20963"
Community content is available under CC-BY-SA unless otherwise noted.