Fenton Crackshell is Scrooge McDuck's accountant, M'Ma Crackshell's son, and also the secret identity of Duckburg's local superhero, Gizmoduck, who appears as a regular in the second and third seasons of DuckTales and as an occasional guest star on Darkwing Duck.

Gizmoduck (along with Bubba and an unused character named Alien Duck) were created by Tad Stones around the same time Chip and Dale were added to Rescue Rangers. Originally, Gizmoduck was intended to be an artificially intelligent robot (and, indeed in the series, Scrooge originally intended to use a security robot designed by Gyro with the designation of GICU-2 until he realized it "didn't have a brain", as it was so dedicated to its directive that it wouldn't even let Scrooge himself into his Money Bin), but the idea was later changed to the current one, akin to Iron Man or RoboCop.

Gizmoduck was originally called RoboDuck, which, coincidentally, was kept as his name in the Netherlands and Japan. This is also why there is an "R" shaped insignia on the Gizmosuit's chest. 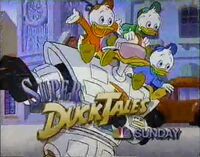 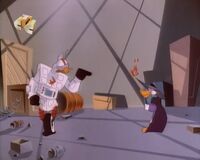 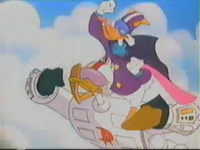 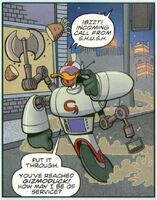 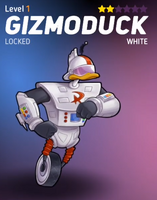 Gizmoduck in Disney Heroes: Battle Mode
Add a photo to this gallery

Retrieved from "https://the-disney-afternoon.fandom.com/wiki/Fenton_Crackshell?oldid=33875"
Community content is available under CC-BY-SA unless otherwise noted.