Flintheart Glomgold is Scrooge McDuck's arch-nemesis and business rival, primarily because Glomgold is jealous of Scrooge's wealth and desperately wants to steal the title of "World's Richest Duck" from Scrooge, but so far has only managed to maintain his status as "World's Second Richest Duck" (though that title is somewhat in dispute with another of Scrooge's adversaries, John D. Rockerduck). Like Scrooge himself, Glomgold was created by Disney Legend Carl Barks.

Flintheart will attempt any possible underhanded deed in order to defeat Scrooge and will often hire such thugs as Pete or the Beagle Boys to do his dirty work.

Selfish, dishonest and incredibly greedy, his goal is to become the world's richest duck, but the thing that makes him such a cruel duck is the fact that he'll cross every line to achieve this, even to the point where he might even try to murder Scrooge. He cares for no one other than himself, acting as a loner at some points.

In the original comics, Glomgold wears an ascot, a black coat and a Scottish bonnet. Many of Glomgold's appearances are centered around the fact that he is similar to Scrooge in so many ways (even having a Money Bin that's nearly identical to Scrooge's), both in appearance and personality. However, unlike Scrooge, who does not believe in obtaining money through dishonest methods, Flintheart makes immoral decisions, which has resulted in him often losing to Scrooge.

In the comics, he owns a money bin that mirrors Scrooge's. However, it is in the middle of a South African jungle, as opposed to Scrooge's which is in the center of Duckburg.

Glomgold serves as one of the main antagonists of the series, making recurring appearances. As in the comics, Glomgold tries his best to become the world's richest duck.

Under Carl Barks' authorship, Glomgold hailed from South Africa, where he made his fortune in diamond-mining. However, when he made his animated debut on DuckTales, the U.S. government had tensions with the Republic of South Africa. Wishing to avoid controversy, as South Africa had been associated with apartheid and not with diamonds at that time, the Disney animators changed Glomgold's nationality from South African to Scottish. Another departure from the comics was that Glomgold is also just as notoriously stingy as Scrooge, but even more so, whereas Scrooge will at least be generous with his money on occasion. The animated Glomgold was shown as a big spender. This may have been an amalgamation of another one of Scrooge's rivals, John D. Rockerduck, who didn't appear in DuckTales (but would eventually appear in the revival comics).

Glomgold is introduced in "Wrong Way in Ronguay", the second part of the pilot movie "Treasure of the Golden Suns", in which Scrooge and his nephews find a map to a sunken treasure. Glomgold teams up with a villain named El Capitan to stop Scrooge and gain the treasure for themselves.

Glomgold would go on to scheme and battle Scrooge in several episodes. Some of his evil deeds include framing Scrooge for theft and having him arrested, banishing Scrooge to a remote island through the power of a genie and even having Scrooge's own employees work for him.

Glomgold makes a cameo appearance in the Darkwing Duck episode "In Like Blunt", along with the Beagle Boys and Magica De Spell, among the bidders for the secret S.H.U.S.H. agent list.

Glomgold made brief appearances in both of the NES DuckTales video games.

At the end of the first game, after Scrooge defeats Dracula Duck, Glomgold shows up, being airlifted by a vulture (presumably a transformed Magica De Spell), and Scrooge must climb a rope up to the five treasures in order to win the game. If Glomgold reaches the treasures first, the player loses a life and has to fight Dracula Duck again. The remake, DuckTales Remastered, expands on Glomgold's role in the game, adding in a sub-boss fight against him midway through the Himalayas level. It is also later revealed that he and Magica teamed up sometime prior to the events of the game and manipulate Scrooge into collecting the five treasures so Magica could use them to summon Dracula Duck.

In DuckTales 2, after Scrooge finds all of the treasures, Glomgold takes Webby hostage and holds her for ransom on the pirate ship in the Bermuda Triangle. Scrooge gives Glomgold the treasures, only to discover that this "Glomgold" is actually a shape-shifting robot called the D-1000, programmed to destroy him. After the D-1000 is defeated, the real Glomgold sinks the ship and tries to take Scrooge and the treasures with it. 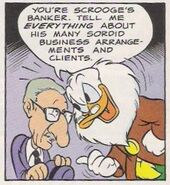 Retrieved from "https://the-disney-afternoon.fandom.com/wiki/Flintheart_Glomgold?oldid=25846"
Community content is available under CC-BY-SA unless otherwise noted.