Gosalyn Waddlemeyer-Mallard is Drake Mallard's spunky, "spirited" adopted 9-year-old daughter and a supporting character in Darkwing Duck. She was voiced by the late Christine Cavanaugh. She is an unstoppable bundle of energy and spunk, which Darkwing has said is more of a handful than fighting evil. She frequently tags along on Darkwing's adventures, despite his attempts to get her to stay behind, as he does not want her to get harmed.

She was the orphaned granddaughter of a brilliant scientist, became a ward of the court, and was placed in an orphanage. Before his death, Professor Waddlemeyer developed a highly destructive government secret weapon called the Waddlemeyer Ramrod. In a dastardly attempt to steal the Ramrod and arm it, the nefarious Taurus Bulba kidnapped the professor's last known living relative, young Gosalyn, thinking she knew the secret arming code. Fortunately, Gosalyn was rescued by Darkwing Duck, who kept her safe in his secret hideout atop a tower on the Audubon Bridge. Unbeknownst to Gosalyn, Professor Waddlemeyer had secretly taught the code to her in a lullaby he used to sing to her each night. Bulba learned of the secret and was nearly able to carry out his threat. Darkwing, with the help of his sidekick, Launchpad McQuack, was able to save Gosalyn and the world. During their time together, Goaslyn and Drake grew quite fond of each other, and he eventually adopted her.

Knowing her adoptive father's secret identity, she too has occasionally donned a crime-fighting costume. First she called herself the "Crimson Quackette," but later, after developing an interest in archery, she began calling herself the archer QuiverWing Quack. Her first appearance as QuiverWing Quack was in the episode of the same name, where she was instrumental in defeating the plans of Negaduck. Later, in "Paint Misbehavin' " she helped to defeat the criminal Splatter Phoenix. Gos' best friend is the brainy young Honker Muddlefoot, who also knows of Drake Mallard's superhero identity. When Gos decided to become a superhero Honker was drafted as her sidekick, the Arrow Kid, and they proved themselves to an adoring public against. The theme of Gosalyn wanting to be her father's sidekick or a superhero in her own right was a continuing thread in the series. 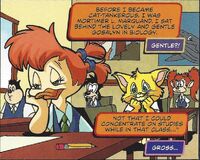 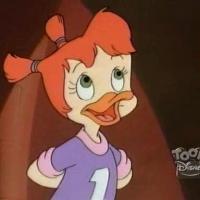 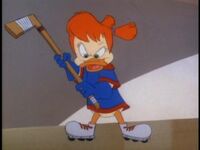 Retrieved from "https://the-disney-afternoon.fandom.com/wiki/Gosalyn_Mallard?oldid=23886"
Community content is available under CC-BY-SA unless otherwise noted.