Emil Eagle, the Beagle Boys, Magica De Spell, Flintheart Glomgold
Gyro Gearloose is an anthropomorphic chicken or cockatoo created by Carl Barks for The Walt Disney Company. He originated in the Scrooge McDuck comic book continuity, appearing in comic book stories as a friend of Donald Duck, Scrooge and anyone who is associated with them. As such, he was also a frequent co-star on DuckTales, where he was voiced by the late Hal Smith. 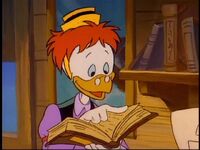 Retrieved from "https://the-disney-afternoon.fandom.com/wiki/Gyro_Gearloose?oldid=29587"
Community content is available under CC-BY-SA unless otherwise noted.