"I made [my fortune] by being smarter than the smarties and tougher than the toughies."
"Bless me bagpipes!"
Scrooge McDuck is the richest duck in the world who serves as the main character on DuckTales. Created in 1947 by Disney comic book writer/artist Carl Barks, he is the elderly and curmudgeonly, but also adventurous, uncle of Donald Duck, and great-uncle to Huey, Dewey and Louie. As his name and personality suggest, he is named after and based on the character of Ebenezer Scrooge from A Christmas Carol. Barks originally created him as a one-shot antagonist in the comic story "Christmas on Bear Mountain", but he found the character had so much potential that he continued to use Scrooge as a regular in his stories, to the point that he eventually supplanted Donald as the main character in the Duck comics and even got his own comic series in 1952.

Prior to DuckTales, Scrooge made his animated debut by way of a cameo in the intro sequence to The Mickey Mouse Club. He then starred in the 1967 short Scrooge McDuck and Money, and later portrayed his namesake in the 1983 featurette Mickey's Christmas Carol. 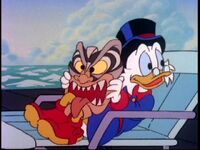 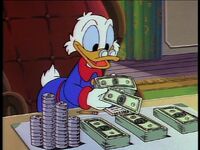 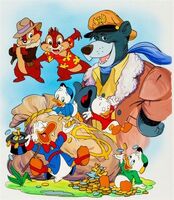 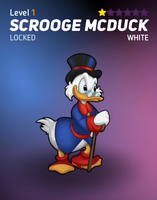 Scrooge in Disney Heroes: Battle Mode
Add a photo to this gallery

Retrieved from "https://the-disney-afternoon.fandom.com/wiki/Scrooge_McDuck?oldid=33957"
Community content is available under CC-BY-SA unless otherwise noted.